Earning Money as a Photographer BTS

A viewer with expert technical skills wondered what more was needed to become a financially successful photographer. Hint – it’s not more equipment.

It seemed the perfect opportunity to get in a canoe – now that my neighbourhood canoe rental spot (Toronto Adventures) has been allowed to re-open with the appropriate social distancing protocols.

I decided to shoot with the Nikon Z7, using the 24-70mm F2.8 lens (it’s still here, on loan from Nikon Canada, in social isolation with me). In the close proximity of a canoe, that would be wide enough to get the whole scene in and hopefully convince you that I was not using green screen. Please let me know if that was successful. Kim gets the credit as the camera operator. The Z7 is on a tripod. This shot, were both the camera and I are moving together, doesn’t need a gimbal or in camera stabilization.

Because there’s a lot of in and out of shadows on a sunny day, I had to make a choice between recording externally, which would have enabled me to use N-Log, or internally. I decided that we were taking enough equipment with sufficient points of failure, so went with internal recording on the XQD card.

After doing a few test shots the day before, I decided to use the neutral picture control, I set the contrast to -3, and saturation -1. I also set Active D-Lighting to High. With a three-stop ND, ISO at 64 and shutter at 1/60 (for smooth paddling action) Kim used F4 to keep the brightest elements from the right side of the histogram.

We set white balance to direct sunlight, but did shoot the DSC Labs chroma selfie as a reference. After importing the file, it turned out that further white balance adjustments weren’t necessary, although I did make some small exposure tweaks. There was one section where the image was still too bright, another was too dark. I separated those and did further fine tuning with them, dissolving in and out of the modification over 5 seconds. I tightened the shot slightly in edit.

I was also unsure about the mic. Somehow, the VT-502 I typically use didn’t connect properly with the Z7. I could record with the Sennheiser clip mic mounted in my glasses and connected to an iPhone, or a camera-mounted Sennheiser MKE 400 shotgun. After test recordings, I decided I’d use both. That turned out to be a good decision, as the clip mic didn’t pick up enough ambiance, while the MKE400 picked up too much, particularly wind noise. The final audio mix uses the clip mic primarily, with some ambient sweetening from the MKE400. I did not add or time-shift any ambient effects for the mix.

This is take one, and it is (if it’s not obvious) a single take. I wrote the script in One Note, exported it to Pages and read it from an iPhone mounted on a flash shoe mount on the Z7 with Pages in presenter mode. I did rehearse it several times, making adjustments to build in looks and pauses. In edit it sounds as if I mis-pronounced “gaze” as “gage”. Paul Marshman provided editorial guidance – our challenge was to avoid gendered pronouns without being obvious, as we didn’t want to mis-identify the commenter. Hopefully you didn’t notice. 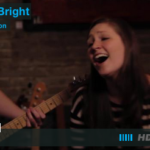 Calla’s Video for “Burn Too Bright” 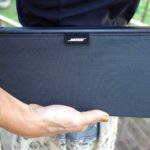 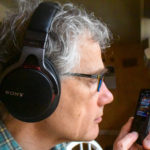 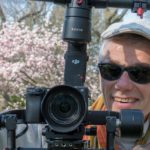