I am not affiliated with Sony, but I was given the opportunity to loan the camera for a few weeks to review it.

My thanks to Christine and Elaine at Sony for their support. My thanks to Rowena and Hank, our hosts on Prince Edward Island (a most delightful vacation spot). My thanks to Hank and Kim for sitting as models while I tested various settings and features.

I’ve posted the images on flickr, so that you can review the EXIF data. I recommend you also read David Pogue’s review in the New York Times, and check out what DPReview has to say. Note that the difference between the RX1 and the RX1r is an optical low-pass filter. I do not have enough technical understanding of digital cameras to fully appreciate the difference that this might make, and I did not have the opportunity to try the two cameras side-by-side to determine if I could see the difference. What I will say is that everyone who has seen my RX1r images remarks on how clear and crisp they are.

Here are my video production notes:

As presented in the video, the RX1r’s images are resized by Final Cut X using spatial confirm set to “fit”. I’ve further scaled them to 90% to make them look like photos, as 4×3 images leave a border in a 16×9 frame. The closeups of the images are with FCX’s spatial conform set to “none”. This provides a 1:1 pixel mapping from the original 6000×4000 pixel image to the 1920×1080 video. The Youtube video above is at 720 resolution. The full 1080 version is posted on Vimeo.

Screen captures from the camera are done in my home studio (the shots with the Playmobil train set), using the camera’s HDMI output set to 1080i, as the HDMI to component convertor does not accept 1080p. I capture using the EyeTV HD. I am looking for a portable solution, enabling me to record in the field so that the sample images and screen captures could be coordinated. Most capture sequences have been accelerated or edited.

Shots of the camera are taken with the NEX VG20 camcorder. If I’m in the shot, Doug is behind the camera. If you’ve spotted that Hank is in both ends of the panorama at 5:25 and 10:21, he dashed behind me as I panned. It took several attempts to make that trick work. The Picture Effect demo is a composite – I recorded the settings screens and then superimposed it over still captures I’d taken on PEI using an alpha channel key.

The “zoom” sequence is recorded directly from the camera. The screens labelled “playback with zoom” use the camera’s playback, and then zoom to illustrate detail in the image.

The slide show modes are all captured from AppleTV (at 720p resolution).

Those cicadas are loud.

Always happy to have your comments and suggestions, I read and reply to all. 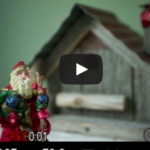 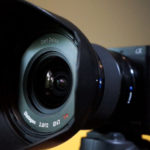